I just bought my grandson, Treyson,  the Blaze Monster Machine Dome Playset where Blaze and the Monster Machines race. Mostly Blaze and Crusher because they are rivals. He can race them side by side or going in opposite directions. It may sound easy, but they have to go through the Ring of Fire or get by the chomping Sharkbot that Crusher built to stop Blaze! This set comes with the racing track and 2 trucks, Blaze and Crusher. 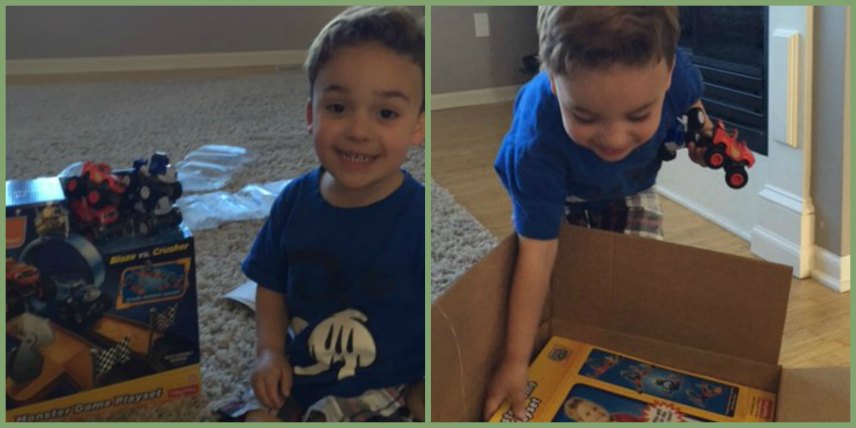 Kids love to race cars or trucks, especially boys.  Trey has been racing his Blaze and Crusher trucks down the sidewalk, but that doesn’t look as exciting as the Blaze and the  Monster Machines Dome Playset. Well, he doesn’t know it yet, but I just bought it on Amazon.com and it is headed his way. I had them address it to him because very kid loves to get mail. He was so excited when it arrived, but he had to wait for his mom to come home from work. I warned his mom it was coming so she could get some good pictures of when he opens it. 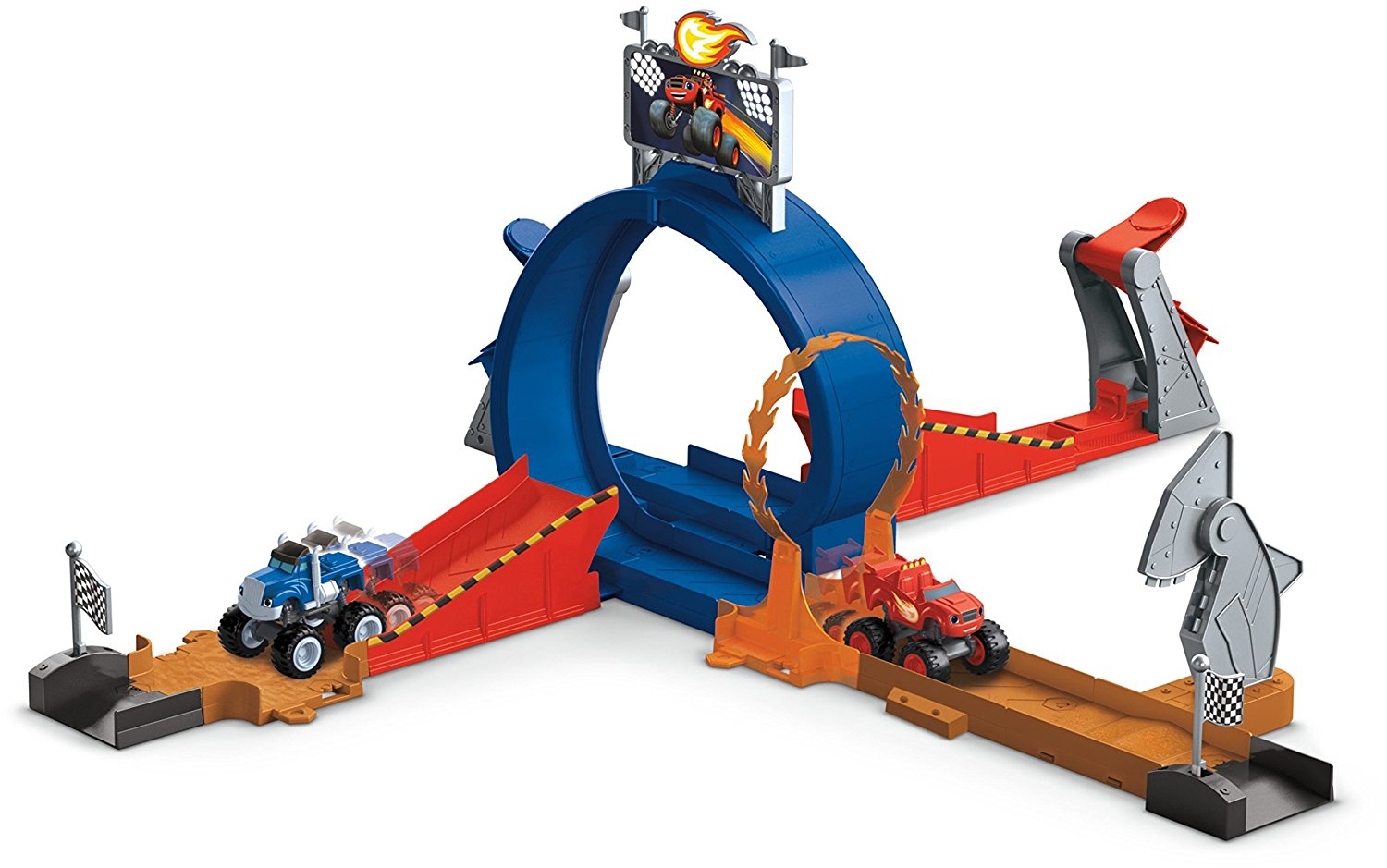 He was so excited when he opened the box. He had no idea what I had sent him. They set it up right away and let him race Blaze and Crusher. Here is a video his mom took of him opening the box. He got a little confused at the end as to whether he was reciting his numbers or thanking me.  I had just as much fun watching this video as he had opening the box and seeing his race track inside.  I called this morning to see how he was. He has another ear infection and had to go to the doctor, but he wanted to take his race track with him. I bet he slept with it last night. Funny Boy!

They have a huge finished basement to set up the race track for Blaze and Crusher, and I am sure his cousins will be over to race with him as soon as they find out he has this. The sides on the race track are a little bit higher than other race tracks, so Treysons trucks will stay on the track more now and stop flying off as much. There are several more characters in the Blaze and the Monster Machines story, so picking up more for the other kids to play with is easy. You can either buy the entire set at once or buy each piece separately so you get the exact trucks your kids like.

You can run the race in the Dome Race Track side by side or in opposite directions. Race them or crash them, either way the kids love this Blaze Dome Set. You can set the track up as you see on the box or you can switch it around in all different ways. His parents set it up side by side and you can see Blaze jumping through the ring of fire with no trouble. But can he make it though the chomping SharkBot? Treyson looks really serious about this racing stuff.

There are benefits to these toys and the show that kids don’t see. It teaches them kids STEM skills, which we all love. Every episode of the show features something scientific or counting or something that gets the child involved. This race track will teach him about momentum. If your kids start watching Blaze and the Monster Machines, don’t be surprised if they start using big words like momentum. 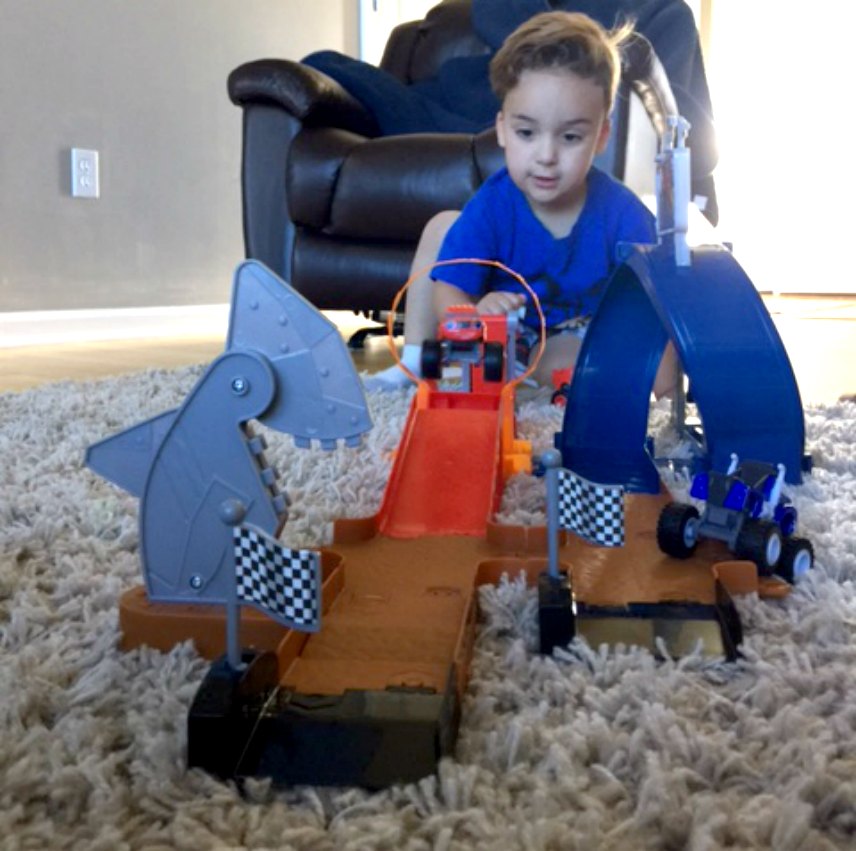 Each track has its own launcher and there is a trick to making the trucks go faster. Treyson is only three, but he already figured it out.  I am sure he will be practicing to know exactly how much power to give that launcher to see Blaze when the race.

It’s all about Momentum! Get Your Own Blaze Monster Machine Dome Playset

The harder you hit the launcher, the more momentum Blaze and Crusher will have to zoom down the track, around the loop, and through the flaming ring! Hit is too hard and it might wreck. Don’t hit is enough, it won’t have the power to get through the ring of fire, the 360 loop or the chomping Sharkbot. It’s all in the wrist. 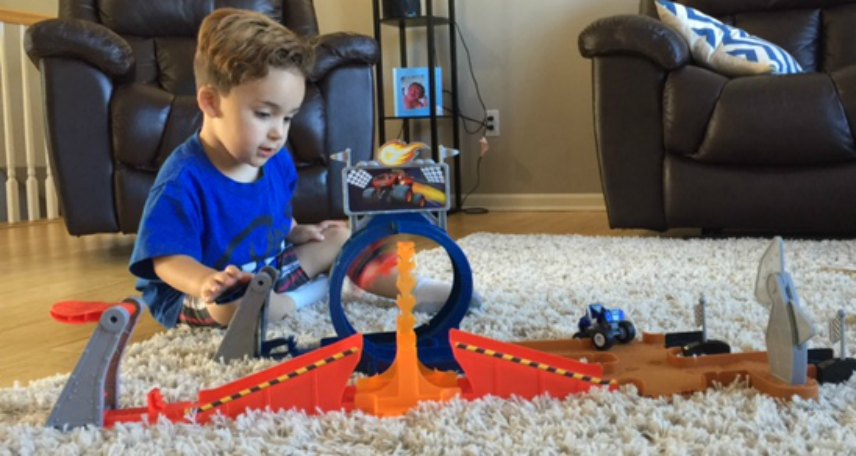 Crusher is up to his old tricks by making the Chomping SharkBot just so Blaze can’t win.  The Chomping SharkBot is waiting at the end of the track to chomp down on Blaze. Can Blaze get by the SharkBot? That is up to Treyson and his skill with the launcher. But first you have to either make it around the 360-degree loop or complete the jump without crashing. 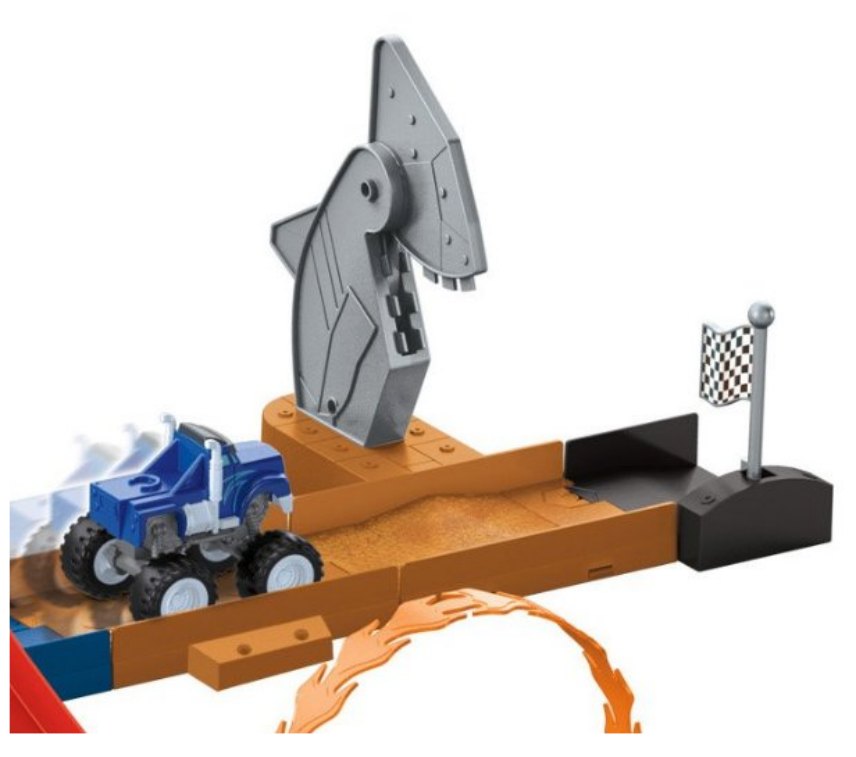 The Obstacle Course – Ring of Fire, 360 Degree Loop, and the Chomping SharkBot 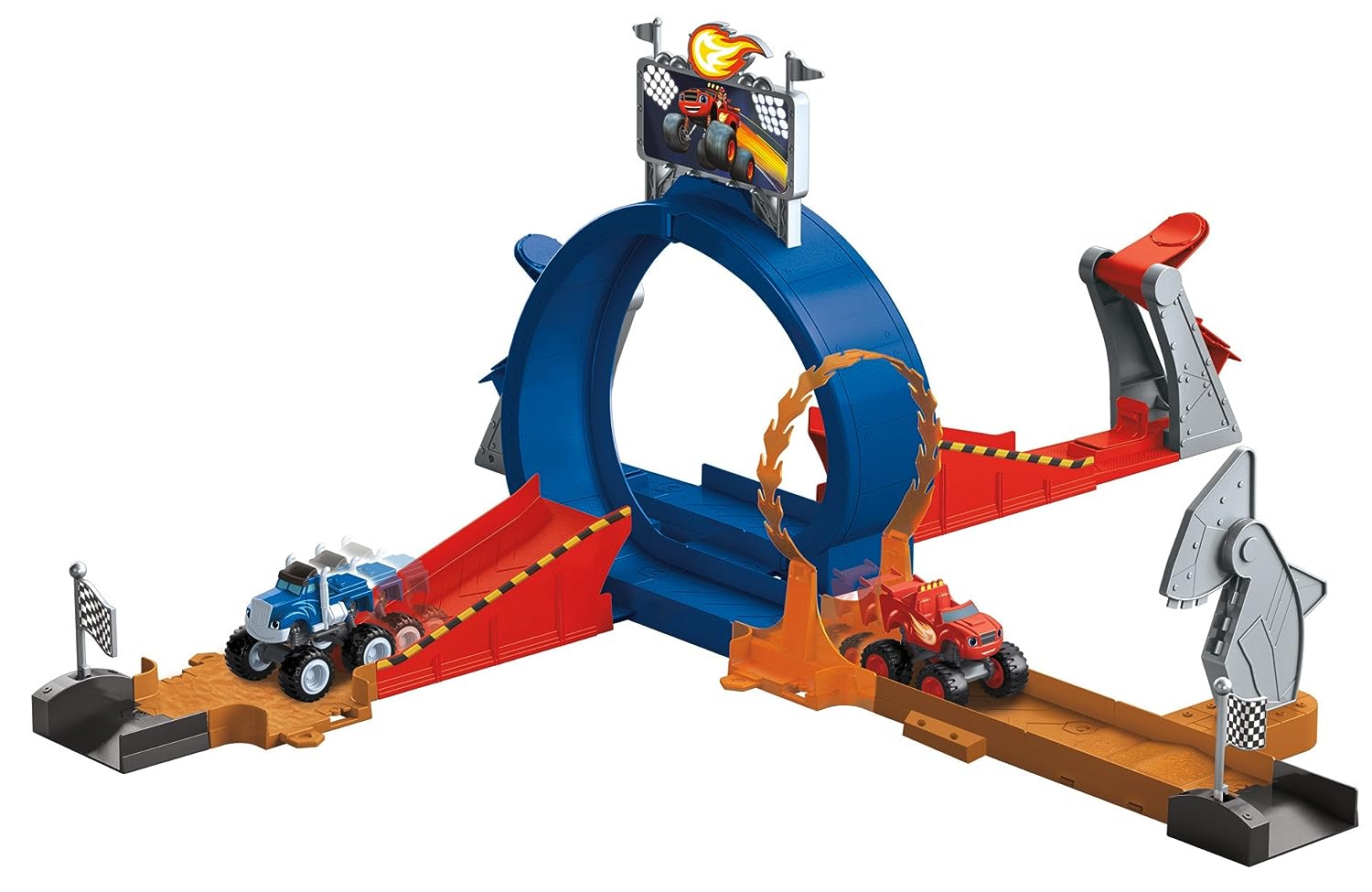 Buy your very own Blaze Monster Machines Dome today and have your kids racing in just minutes.

Don’t forget to put on all the great stickers with flags on them and the Dome Banner.

Set it up in many different ways to have them racing all over the place.

Now that Treyson has his very own Blaze Monster Machine Dome Playset he will be ready for racing any time.

Buy yours today at Amazon.com.

For Treyson, who is just about to turn 4 years old, he prefers the die-cast Blaze trucks because they fit in his little hand. He holds on in each hand.

Look what I found for Treyson! Grizzly Bear Truck from Blaze and the Monster Machines. He will beexcited https://t.co/wyUU9DjzD4 via @amazon 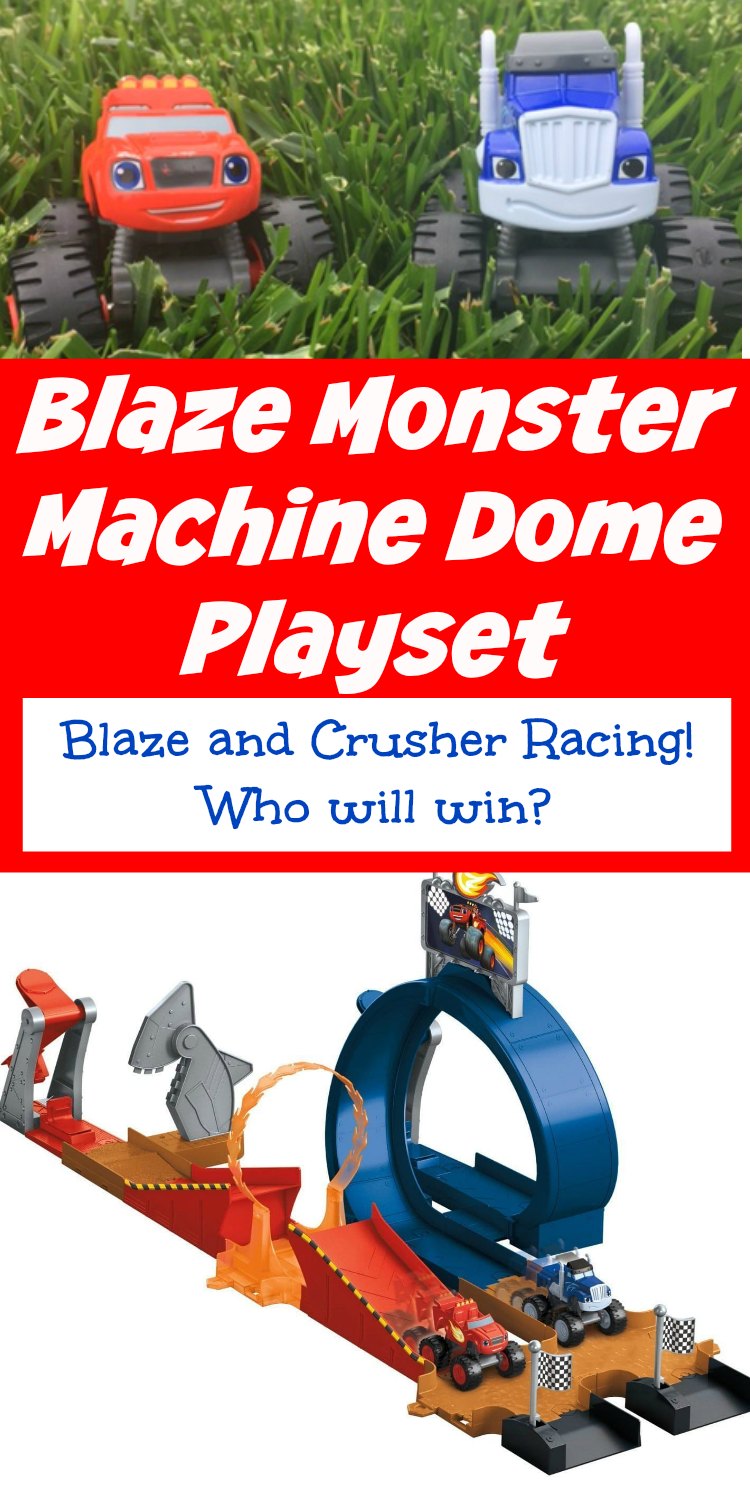